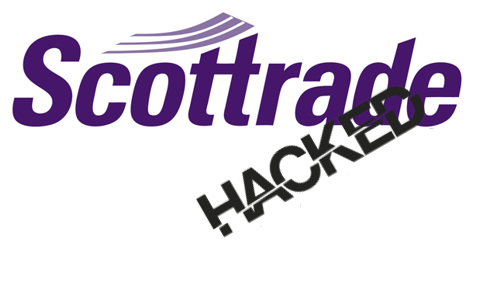 St. Louise-based Scottrade Inc. has sent out an email to its clients informing them of a recent cyber -attack that affected their systems. The company has revealed that they were alerted of the breach by FVI agents who have been investigating it since it occurred sometime between late 2013 and early 2014. It was further indicated that the breach may have affected other financial institutions too.

The company launched an internal investigation to ascertain the origin and aim of the attack. The results matched those of the federal investigation, which pointed out to information theft that affected some 4.6 million customers. The management through its email states that among the information stolen were a list of client names and street addresses. Even though other sensitive customer details such as email addresses and social security numbers were also contained in the system, the company revealed that the attackers were more interested in contact information which was their focal point.

Customers have been reassured that there is no cause for alarm since their funds as well as the company’s trading platforms had not been compromised in any way. The message also informs the clients that all their passwords remain highly encrypted and secured against any breach at all times. Furthermore, there had been no indications that they had been affected by the attack in any way whatsoever.

On its website, the company has apologized to its clients for the incident. It has admitted that such occurrences lead to frustrations on the side of the clients and are therefore keen on reassuring them that their accounts are safe. In addition to this, Scottrade Inc. has also revealed that it would get into contact with all the clients whose details might have been stolen for additional information and resources. The management has promised to keep them updated on any progress made from the forensic investigations. In addition to this, the affected clients would be issued with an AllClear ID to protect them against identity theft.

The company has further divulged details that they have taken the necessary steps to seal the point through which the attack was conducted. Shea Leordeanu, the company’s spokesperson, stated that they have solicited the services of security experts to help in undertaking the forensic audits and to strengthen the system to avoid any future attacks. They are also working closely with FBI field agents not only in New York but also in Atlanta to bring the perpetrators to book.

Such intrusions against home networks, financial systems and corporations have risen in the recent past. It is widely believed that the hackers intend to use the stolen data for stock scams. This may lead to a large number of the affected customers getting spam mails. Five suspected perpetrators of a similar breach on JP Morgan Chase systems in 2014 were prosecuted by Manhattan prosecutors in July 2015. The five were accused of intending to use the more than 80 million addresses stolen to facilitate stock manipulations. To protect its affected clients, the company is going to monitor their credit accounts for a whole year. This is despite the fact that Social Security numbers of affected customers were not stolen.