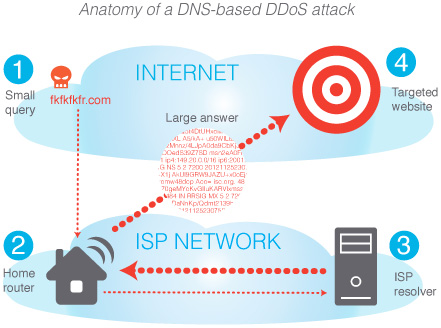 Home routers are the easiest vector of attack because most users are unaware of the security implications. The router firmware are never updated which leaves it in the open to all kinds of attacks. Hackers use this as their target and find ways to infiltrate the vulnerable routers.

Traffic from amplification amounts to trillions of bytes a day disrupts ISP’s, websites and individuals. Impacts of such attacks on on ISPs are fourfold:

“Existing in-place DDoS defenses do not work against today’s amplification attacks, which can be launched by any criminal who wants to achieve maximum damage with minimum effort,” explained Sanjay Kapoor, SVP of Strategy, Nominum. “Even if ISPs employ best practices to protect their networks, they can still become victims, thanks to the inherent vulnerability in open DNS proxies.” says Reuters