The Syrian Electronic Army – a hacker group supportive of Syrian President Bashar Assad – managed to hack into Facebook, on the week of 10th Anniversary.

The hackers first claimed to obtain Facebook.com as published on twitter at approximately 6:30 Eastern Standard Time. WHOIS search on domain registrar indicated that the email address was tied to Facebook was been changed to a Syrian gmail account which confirmed the hack.

The SEA claimed it  did not change the nameservers of Facebook’s because  the process takes long time and it was Abandoned . A tweet shows that  “Taking too much time.”  Hence this hack did not impact normal operations of facebook not its users.

“Half an hour after the SEA tweet, the domain name returned to [email protected], indicating that Facebook and MarkMonitor – a domain management firm – had rectified the error and prevented any serious impact”

The technicality of the hack is not yet known and we haven’t heard about this fro facebook yet.

A Facebook spokesperson confirmed that the website’s nameserver information was never altered. 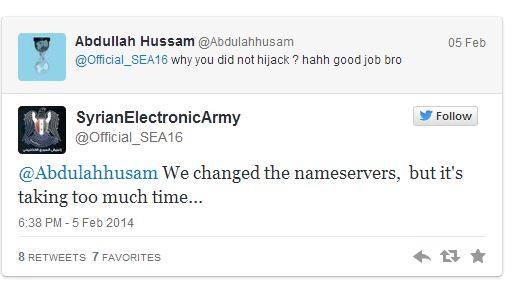