On Febrauary 15th, Kickstarter sent an email to its customers and published a news on its blog about a data breach on kickstarter. The accessed information includes usernames, email addresses, mailing addresses, phone numbers and encrypted passwords.  The sophistication on the hacker is not known yet but its possible that passwords can be extracted by an experienced hacker.

Kickstarter was informed by the  law enforcement officials and alerted about the unauthorized access to their customers’ data. Based on their blog Kickstarter acted swiftly patched the security issue  and have taken counter measures to enhance their security. Thei further said that

“No credit card data of any kind was accessed by hackers. There is no evidence of unauthorized activity of any kind on all but two Kickstarter user accounts.”

Kickstarter doesn’t store credit card data, however they do store last 4 digits of customers belonging to foreign countries. Its however unclear that what may be the intention behind this hack and no information was given in this regard.

The affected customer are sent a email to reset their passwords. Kickstarter has responded to more than 5,000 customer queries so far as per the blog.

Screenshot of the email from Kickstarter to its customers below : 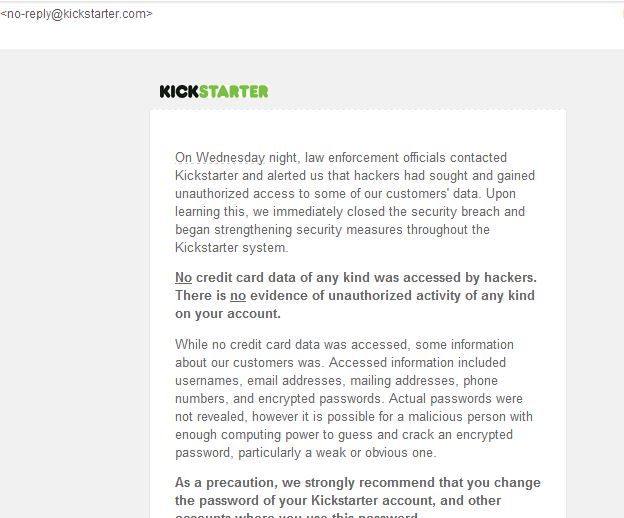 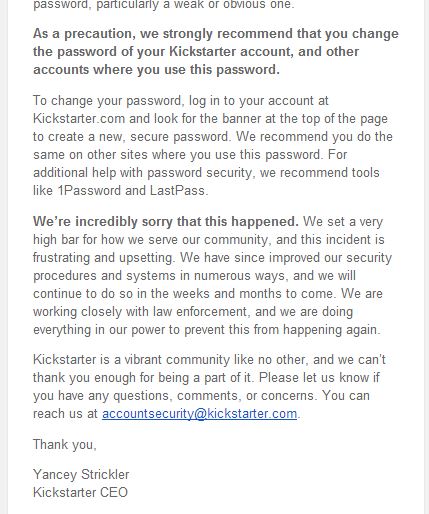