Sophos, the antivirus and encryption products company recently released the ‘Dirty Dozen’ Spampionship tables for the Q4 of 2013. According to Sophos, United states has topped the charts with a 14.5% spam relaying volume. Although it is no matter to celebrate, these results are not completely surprising given that United States is one of the most populated and the best connected country in the world. 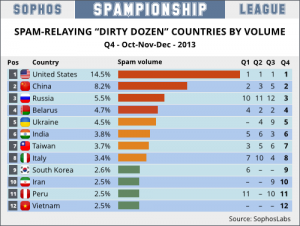 Although the United States has the max spam volume, it does not mean that the spams were generated here.

“In most cases, the countries in the Dirty Dozen made it onto the list because a statistically significant proportion of their residents are conducting business online using computers that are actively infected by remote-control malware,” says Sophos Senior Security Analyst, Paul Ducklin. “So the spam aspect is just a symptom – the start of the problem. Zombie malware means the crooks are already on the inside. It’s up to you to turf them out.”

Most spams take a piggy back ride on the Malwares and can go undetected even by many antivirus/antimalware softwares. The only way to make online world safe is to identify and get rid of the malware itself which will in turn reducs the spamming.